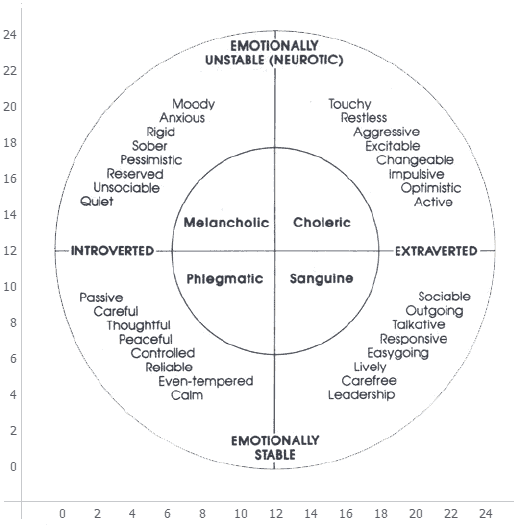 Eysenck initially conceptualized personality as two biologically-based independent dimensions of temperament, E and N, measured on a continuum, but then extending this to include a third, P.

E – Extraversion/Introversion: Extraversion is characterized by being outgoing, talkative, high on positive affect (feeling good), and in need of external stimulation. According to Eysenck's arousal theory of extraversion, there is an optimal level of cortical arousal, and performance deteriorates as one becomes more or less aroused than this optimal level. Arousal can be measured by skin conductance, brain waves or sweating. At very low and very high levels of arousal, performance is low, but at a better mid-level of arousal, performance is maximized. Extraverts, according to Eysenck's theory, are chronically under-aroused and bored and are therefore in need of external stimulation to bring them UP to an optimal level of performance. About 16 percent of the population tend to fall in this range. Introverts, on the other hand, (also about 16 percent of the population) are chronically over-aroused and jittery and are therefore in need of peace and quietness to bring them DOWN to an optimal level of performance. Most people (about 68 percent of the population) fall in the midrange of the extraversion/introversion continuum, an area referred to as ambiversion.

N – Neuroticism/Stability: Neuroticism or emotionality is characterized by high levels of negative affect such as depression and anxiety. Neuroticism, according to Eysenck's theory, is based on activation thresholds in the sympathetic nervous system or visceral brain. This is the part of the brain that is responsible for the fight-or-flight response in the face of danger. Activation can be measured by heart rate, blood pressure, cold hands, sweating and muscular tension (especially in the forehead). Neurotic people – who have low activation thresholds, and unable to inhibit or control their emotional reactions, experience negative affect (fight-or-flight) in the face of very minor stressors – are easily nervous or upset. Emotionally stable people – who have high activation thresholds and good emotional control, experience negative affect only in the face of very major stressors – are calm and collected under pressure.

P – Psychoticism/Socialisation: Psychoticism is associated not only with the liability to have a psychotic episode (or break with reality), but also with aggression. Psychotic behavior is rooted in the characteristics of toughmindedness, non-conformity, inconsideration, recklessness, hostility, anger and impulsiveness. The physiological basis suggested by Eysenck for psychoticism is testosterone, with higher levels of psychoticism associated with higher levels of testosterone.

L – Lie/Social Desirability: Although the first 3 scales were predicted upon a biologically based theory of personality, the fourth scale has not been theoretically specified to the same extent, but it was considered to be conceptually strong to the extent that it would demonstrate the same degree of measurement similarity across cultures.